Just a little bit about our setup

We have setup a backup using S3 as an archive dir and using staging directory on our backup node. On every Sunday morning, we create new repo (archive previous one) and create hourly backup during the week…and this hourly backups are making my hairs grey

Every backup is taking longer to complete and in the final days (Friday, Saturday…before making new repo), it can take more then an hour in which case a backup scheduled is skipped. 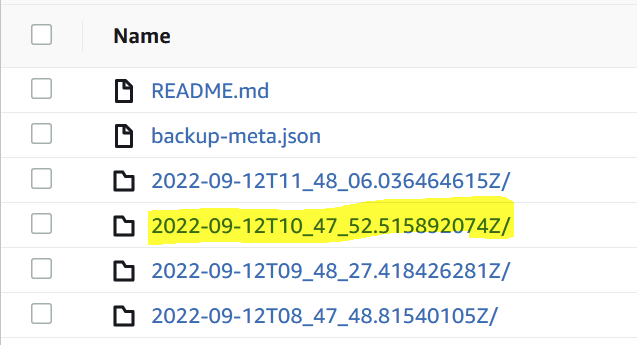 Can someone please help us understand this? At least a hint, what is going on that 47+ min, before directory on S3 is create?

I can’t find a reason why backups are taking so long to complete.
I know we can create a new repo during the week as a work-around but I would like to at least understand before doing that…

Just FYI…we also have another cluster (same version, hourly backups using S3) also with 6 nodes with same services set up but it is running on x86_64 arch… backups are completed in few minutes all week around…

Hi @matjazs. I’ve taken a look at the logs you have uploaded and can see the time taken that is reported in the UI is accurate. During that time we see a lot of lines like:

cbbackupmgr will report progress to the backup service periodically when the transfer from the cluster is in progress. It won’t report progress during any setup or teardown steps however, and when uploading to cloud storage we do download and upload some metadata files at the beginning and end respectively. This, along with the backup folder timestamp, does suggest the download of the metadata might be what is slow here.

Could you please confirm whether the x86_64 cluster is running in the exact same configuration. In particular:

It’s perhaps worth noting that we generally advise against running the backup service on the same node as the data service as they will be competing for resources.

Finally may I ask if you are an enterprise customer? If so, it would be best to continue this on a support ticket (https://support.couchbase.com/hc/en-us) so that we can track things a little better.

Hi Matt. Thank you for this info…at least now I know where to look for issues

…will check if anything is not as it should be around S3 and our backup instance.

Sadly no…I am not enterprise customer